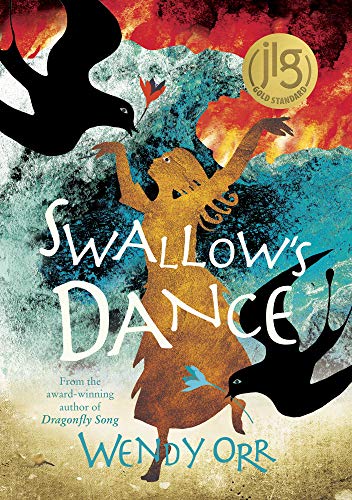 Swallow's Dance is a beautiful portrait of the Bronze Age Aegean. The story follows a teenage girl who lives through a volcanic eruption (most likely Thera), making this upper-class girl become a refugee who has to fight for survival in a foreign land. While the story is set thousands of years ago, it is highly relevant today. Wendy Orr's story could easily be used in classrooms to explore not only history but also what it means to be a refugee today.

Author Wendy Orr (famous for Nim's Island, which has been turned into a motion picture) has created a captivating narrative aimed at young adults. The protagonist in Swallow's Dance is Leira, daughter of the high priestess on the Aegean island of Thera (modern-day Santorini). Throughout the story, we learn about the customs and culture of the Bronze Age Aegean, with a focus on growing up, family life, and religious rites.

While Leira is preparing to become a priestess like her mother, disaster strikes: the island's volcano "goddess" erupts, destroying her village, forcing the survivors to flee to a neighbouring village. After a short stay there and efforts at rebuilding the village, Leira's father, a merchant captain, takes his family away to spend some time in Crete. Life in Crete turns from bad to worse as a tsunami strikes, which was caused by the explosion of Thera and the complete destruction of Leira's home island. Leira, her mother, and their servant are now refugees in a foreign and unwelcoming land - a situation that we are well aware of, given the refugee crisis of the last five years.

This story is far-removed from modern times while allowing the reader to put themselves into the shoes of a displaced refugee who has lost everything.

Told through the eyes of a refugee who came from high social status and crashed to the bottom of the social ladder, this story is far-removed from modern times while at the same time allowing the reader to put themselves into the shoes of a displaced refugee who has lost everything (family, wealth, status). This makes the book excellent reading for young adults, promoting historical understanding and critical thinking while being highly entertaining and captivating. It is a story most teenagers (especially girls, but also boys) can relate to, and make connections to the experiences of far too many young refugees today.

This book could easily be used in class or in a reading group, followed by discussions around current events. It is highly recommended!

$14.95
plus shipping
$15.43
free shipping worldwide
By purchasing books through this website, you support our non-profit organization. Ancient History Encyclopedia receives a small commission for each book sold through our affiliate partners.

In this interview, Ancient History Encyclopedia is speaking with...
Article

The Bronze Age frescoes from Akrotiri on the Aegean island of Thera...
Article

In this interview, Ancient History Encyclopedia is talking to Wendy...

$14.95
plus shipping
$15.43
free shipping worldwide
By purchasing books through this website, you support our non-profit organization. Ancient History Encyclopedia receives a small commission for each book sold through our affiliate partners.
Remove Ads